There are two prevalent themes floating through the cinematic journey explored in The Finest Hours. Both are ancient ideas that remain as relevant today as when they were first birthed into consciousness thousands of years ago. Most people are familiar with both ideas but rarely recognize the interdependence they share. The first idea deals with ambition and though there are several sources that pre-date the reference, Hebrew scripture brings us the most notable example. Isaiah 6:8 states, “Then I heard the voice of the Lord as he was asking ‘Whom will I send? Who will go for us?’ ‘Here I am!’ I replied. ‘Send me.’”

The idea of being willing to undertake a journey that no one else dares is one of the key characteristics we look for in heroes and heroines. Gene Hackman famously tells Keanu Reeves in The Replacements, “Winners always want the ball when the game is on the line.” Ambition is a slippery slope in our culture, often leaving a trail of those destroyed by greed and ruthless desires, but at its best, ambition can help accomplish the impossible. The Finest Hours is based on the most dangerous and notable Coast Guard rescue in U.S. History, led by Bernie Webber. Webber is the picture of humility – a man devoted to literally not rocking the boat. He’s also a man with a ghost. He was involved in an incident where several locals lost their life a year before the story begins. The deaths seem to have occurred because no one was willing to show courage and step up one fatal night. 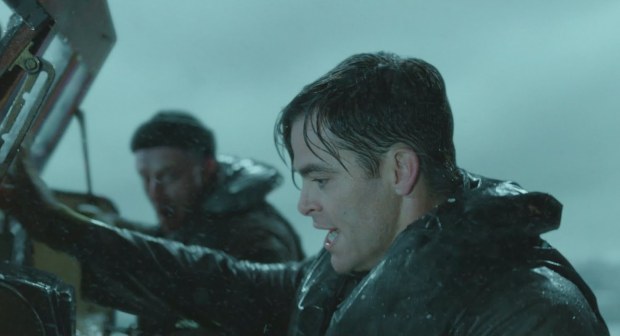 I spoke with director of the film, Craig Gillespie, about how he shaped the character of Bernie Webber with Chris Pine, who portrayed him. “The catalyst is the storm in terms of Bernie’s character but we started with these internal conflicts which is that he’s not a leader, he doesn’t have confidence in himself and it was the storm that can bring that out. We sort of tried to lay that in that this is going to be his character arc throughout and that you feel it from the men around him. They don’t necessarily trust that he can get them through this or trust that he’ll be the right man for the job. He’s got to sort of dig within himself and find that moment. It’s always starting with internal things, it just happens to be the storm that brings him out of that.”

Gillespie speaks the truth. It’s ALWAYS the storm that brings it out of us. But without ambition, we will never enter the storm, much less stare into the void. Chris Pine sensed the same thing in his character. “I found him to be a guy that thought a lot about providence and a lot about his love of the ocean, his job, his love of his family, his sense of duty and that was the wonderful simplicity of the men and it spoke to a generation maybe of men or just maybe a version of the human being who serves others selflessly without asking to be pat on the back or to be recognized because to be selfless is to be good. That’s the kind of man I thought he was,” Pine told me. He continued, “For me, really the driving force was fear. I think fear is a quality that we’re all accustomed to or aware of in our lives, somehow anxiety. Am I good enough? Will I ever be good enough? Will I ever live up? Those are really the things that I understood about Bernie and I felt were the driving force behind his journey. It’s a classic hero’s journey that arc of the man in his father’s shadow, thinking will he ever be good enough, going out into the deep dark abyss of his journey and into the mouth of darkness. Will he come back and whole?”

The second theme that is woven throughout the story involves unity – we’re all in this together. Gillespie agreed, “It is about unity and hope and people basically taking the high road and choosing to be active without feeling that they’ve got to get rewarded in some way. That was something with these guys and part of that generation, where it was just what you did. It wasn’t for the accolades, it wasn’t for the social media. Literally Andy Fitzgerald’s (a member of Webber’s team) wife said she didn’t find out till 4 years after they were married that her husband had done this.” Webber and his men had several opportunities to save themselves from the impending danger. They could have easily abandoned those they have went out to save and no one would have thought less of them. But they refused the temptation at every turn. Sink or swim – they decided it would be together.

I asked Ben Foster, who portrays Richard Livesey in the film, about the theme. He said, “The world has those that are devoting their lives to the service of others and be it any kind of military or service industry, these are people who have made a decision in their life to serve their fellow human. The sacrifice of that, the selflessness of that, of course is appealing and what this film is about. I don’t think I’d be alone in this room to say that the culture seemingly has become far more self centric, the very word, ‘selfie,’ and ‘selfie stick,’ is how people travel now. Rather than looking out, they’re looking back at themselves, mirrored sunglasses with the mirrors on inside, so to tell a story about the men and women who are looking out and not for people to say, ‘Look at me looking out,’ because that’s your job and that’s it and that’s enough and that’s good. I think we need more and more of that in this world right now as a reminder.” Casey Affleck, who played Ray Sybert, agreed, “I think there are parts of our contemporary culture that are pretty disgusting and it’s easy to watch TV and think that we are screwed. There are also people you hear about who do things – good things. It just doesn’t make the news because it doesn’t sell, but it should.”

The Finest Hours is playing in theaters nationwide.

← THE REVENANT and the Myth of Redemptive Violence
The Necessity of Shadows: A Closer Look at THE WITCH →